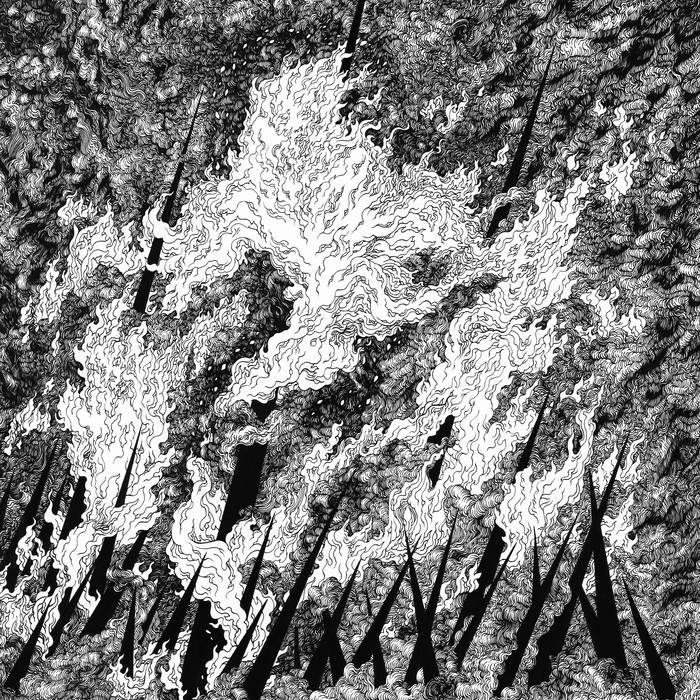 Revolt of the Apes

Today the combined forces of Altare Productions, Psychic Violence and Haeresis Noviomagi have released the long awaited collaborative offering by Vilkacis, the singular project of prolific alchemist M. Rekevics, and Turia, an ascendant Dutch black metal formation. The split LP is to be unleashed on black vinyl by the esteemed purveyors of underground darkness Altare Productions, while a pro-tape edition is handled by Psychic Violence Records in the US and Haeresis Noviomagi in Europe, signifying the bonds forged across the Atlantic.

Known for his work in Fell Voices, Vanum, Vorde and Yellow Eyes, M. Rekevics would rightly be considered one of the pillars of North American black metal. While the aforementioned projects are wholly different in sound, an underlying vision underpins Rekevics' fertile career: one of strife, overcoming and the annihilation of all that binds our physical selves to this earth.

Vilkacis can perhaps be regarded as the purest distillation of this idea, effectively channeling the regal triumphalism of the eastern European black metal tradition within an austere and purposeful simplicity. Lyrically, the two songs, “In the Night's Grip” and “Final March into Flame”, display a fierce dedication to overcoming and individuation. Purification through fire and strife.

The second half of the split consists of two tracks by the emergent Turia. After last year's well received sophomore full-length “Dede Kondre”, the trio returns with two fierce songs recorded during the sessions of last years' album. Those familiar with Turia's idiosyncratic take on the genre will know what to expect: from the opening psychedelic swirl of “Tuchtroede” to the tragic march of “Spiegel der Eenvoudige Zielen” that closes the record, entrancement and otherworldly visions beckon. Flowing guitar riffs, combative drumming and desolate vocals: a clear development of the style Turia has become synonymous with.

Lyrically, Turia's side deals with the writings of Marguerite Porete, a 13th and 14th century French mystic. Through her autonomous union with the divine, bypassing the patriarchal authority of the church, she was deemed a heretic and subsequently burned at the stake.

Released by Altare Productions on a limited edition of 500 pieces of black vinyl, all featuring a high quality lyric insert. A pro-tape editionis available at Psychic Violence Records in the US and Haeresis Noviomagi in Europe.

Turia was started in the winter of 2014. The band aims to evoke gripping black metal, stripped to its bare necessities. Utilizing a minimal setup of drums and guitar they bring to life a mirage of sound while anguished screams drag the listener into a vastness of desolation.

Bandcamp Daily  your guide to the world of Bandcamp